… the origin and meaning of Šibřinky? 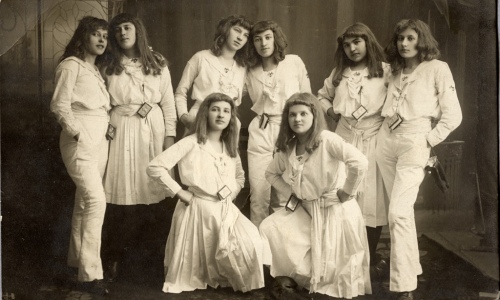 In the early part of 1865, after an extended discussion and various proposals, it was decided by Sokol Prague to hold a Sokol costume ball. Fügner proclaimed: “It has to be a real Sokol costume ball”. Then he turned to Tyrš: “You should find some appropriate name for it”. Tyrš searched Jungmann dictionary; he discarded first few ideas. Then he discovered the verb Šibřiti. In the past it originated from imitation of sparrows' song, and later it stood for practical joking and clowning. From there it was just a short step for designating the Sokol costume ball Šibřinky.

In the evening of 25th February 1865 the entire Sokol hall neighborhood was full of spectators. In front of the Sokol hall were guards with torches. As the carriages carrying the masked guests pulled up to the entrance, they were greeted by an imposing bear.

The inside was fully decorated and the entire main hall became a mass of whirling masked dancers. Fuegner was strolling through in a velvet costume of a mafioso. Tyrš transformed himself into a Spanish hidalgo.

The event was a great success, and the tradition of šibřinky is being continued to this day. It was also enthusiastically continued by the American Sokol Units, many of which still hold this dance annually, even though the origin and meaning of the name is not known to most of its members.

See more about Sokol in on-line exhibit of our museum.