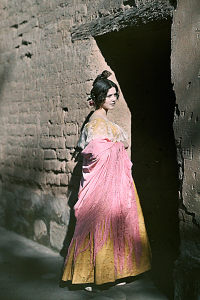 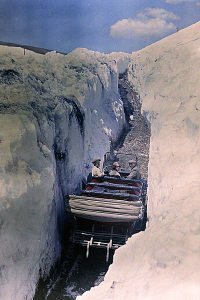 The exhibition from the collection of Mark Jacobs.

Fred Payne Clatworthy was born in Ohio in 1875. After several visits to the West, including bicycling from Chicago to California, Clatworthy settled in Estes Park, Colorado in 1905. A self-taught photographer, Clatworthy was known for his work with the Lumière Autochrome, the firsttrulysuccessfulcolorphotographicprocess.Inadditionto running his Estes Park studio, “Ye Lyttel Shop”, where he sold western curios and hand-colored photographs, Clatworthy did assignments for The National Geographic Magazine as well as presenting autochrome lectures throughout the US. Over one hundred Clatworthy autochromes appeared in National Geographic between 1923 and 1934. In addition to his stunning color work documenting the Western United States, Clatworthy traveled widely, photographing with the autochrome process in Mexico, New Zealand, and Hawaii. Clatworthy claimed to have made over 10,000 autochromes during his career. Clatworthy died in 1953.

Mark Jacobs, Madison, WI, owns a world famous collection of autochromes, including hundreds of Clatworthy‘s works. He visits the Czech Republic thanks to U.S. Embassy support.