1938: Re-opening of railroad from Tábor to Bechyně,� with František Křižík 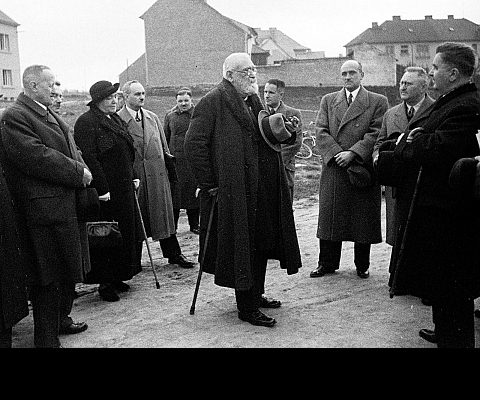 The old man in the middle of the group is famous inventor František Křižík (1847-1931).In the 1930s he was celebrated as a successful Czech scientist, businessman and politician. In 1937 he celebrated his 90th birthday on radio, and in his speech addressed to Albert Einstein, he warned about the imminent war.

The electric railroad from Tábor to Bechyně was built by his company in 1903 and was the first electric railway in Austro-Hungary. The new technology allowed steeper angle of the railway and saved money by avoiding the need for bridges. The 23 km long railway featured electric cars, travelling at a maximum speed of 25 km/h. In 1938 a large reconstruction and modernisation of the railway was completed.

Ever since the 1870’s, the name František Křižík has been intimately connected with the constantly growing record of Czech technical progress, and in its field represents the some of the greatest achievements of Czech ingenuity in the last half century.

The approaching ninetieth anniversary of Křižík’s birth thus gives to the Czech and foreign public alike a fitting opportunity to remember his long lifetime of technical creativity.

His birthplace, the town of Plánice, rendered dignified remembrance of esteem and thanks to the man, who will on July 8th reach 90 years of his blessed life. Present at this celebration was a representative of our town, and member of the Tábor town council, Dr. Václav Mikeš. This gave an opportunity for Tábor’s public to remember the connection between the names of Křižík and Tábor.

Also at Plánice, there was a celebration of the 34th anniversary of the opening for operation of the Tábor – Bechyně electric train, which underlines the deep and long-standing relationship between engineer Křižík and our town.

A realization of this railway route, the first electric one in Central Europe, will always be inseparably connected with Křižík’s name, and thus earns him the unending gratitude of the whole part of our country.

The day before the opening of this railway route, on June 20th 1903, our paper “Czech South” applauded this achievement in its editorial, in the following words: “With great pride we can show before the eyes of the world, that within Austro-Hungarian Empire, right here in southern Bohemia, this very first electric railway was built, and this huge task is a proof of Czech workmanship and ingenuity. The Czech entrepreneur completed this geographically difficult task with exemplary care and diligence, including the bridging of the deep Lužnice river valley. All the necessary components required were produced in Czech factories, and the Czech electric equipment excites admiration from all who see the finished product. The route Tábor – Bechyně can justly be seen as a creation that is genuinely Czech, a creation of Czech brains and hands.”

In similar words, Count Jan Harrach described this achievement on the day of the opening of this railway route. “I rejoice sincerely, here in the Czech South on this day of celebration, that this task, the first in the whole Empire, is a product of a Czech electrical engineer, and the result of Czech work and diligence. The result is a most modern route and train. Thus we Czechs are standing at the head of progress of the whole Empire. Let this great achievement in the whole future stand out, and serve honour to our nation.” Thus our whole locality remembers and celebrates, in these present days, with real joy the important life jubilee of engineer Křižík. All citizenry send him congratulatory greetings and unending admiration of his lifetime achievements, which bring an honour to the Czech spirit and Czech name. Noble minded wisdom gave his achievements solid ground to build upon; the power of science has helped; and together they have created a thing of beauty and a long lasting work of worthiness.

May joy from the beautiful harmony of life and work shine on our beloved Jubilant for many more years.