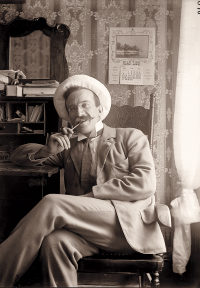 The Exhibition was opened on July 28, 2008, by Jaroslav Strnad, grandson of the photographer

Jaroslav Charfreitág (August 18 1877, Žamberk - May 6 1937, Tábor) inherited an adventurous and liberal character, and was one of the earliest skiers and cyclists. His liberal views however were not always well accepted by others, and thus his father suggested he make a trip to America.

This series of 80 negatives, from his trip to New York and Chicago in 1902-1903, was recently discovered in the attic of his family home, and thanks to the generosity of his family, is being exhibited for the first time.

Jaroslav Charfreitág was born in Žamberk on August 28 1877, as fifth out of seven children. His father František was a well-known businessman and citizen of Žamberk. Jaroslav grew up to become a very free-thinking young man, interested in all modern developments. He didn’t like people who didn’t think for themselves, and he didn’t seem to be impressed by new age ideas and relying only on God. He and his friend Bedřich Krčmář decided not to remove their hats while watching the Easter Sunday procession. They were surprised by the strong reaction they received, as people were offended, and even their parents were ashamed.

The situation became more complicated and so the young men decided to leave home and travel to America. They took elegant suitcases, and also a large 9×12 cm camera which Jaroslav used to document their adventure. In England they waited for a ship, and paid for their tickets by washing dishes and cleaning the ship. In July 1902, they reached New York.

In New York, Jaroslav’s first job was in a hotel kitchen, and then later he worked as a photographer’s assistant. In his first postcard home, he describes the terrible heat, and his surprise that Brooklyn is bigger than New York, and says, “The work is easy, and the salary good (over $2 a day)”. They enjoyed life in America, and in July 1903, Jaroslav took a job as a “First class Machinist”. They were enjoying the culture too, with season tickets for the park concerts run by the New York and Richmond Department of Parks.

From New York they travelled to Niagara Falls, and on to Chicago. However, as they began to feel homesick, in August 1903 they decided to return home, travelling back was by ship to France, where they wanted to see the world famous Eiffel tower.

After returning home, Jaroslav’s father built a house for him, in which he opened the “Pilsener pub”, which was soon to become very well-known. He was also interested in scientific and technological developments, and was a reader of “Inventions and Developments”, a newspaper describing famous patents from around the world. He corresponded with professors at the Technical University of Prague, and consulted with them about his experiments in electrical technology and chemistry. He was active in culture, and was also among the first people to try skiing, and riding an early “boneshaker” bicycle. He also patented a number of his inventions. Like his father, he was active in the public life of Žamberk, and his pub was a place where the intellectuals and important people of the city could meet.

He also used his technical skills to build toys and sports equipment for his children. Examples were his sledge, with a driving wheel and hand brakes, bobsleigh, and modifying his clock to announce closing time in his pub by ringing an electrical bell. Also interesting is his walking stick, decomposable into several parts, and containing a pen, bottle and knife.

Jaroslav died in Žamberk on July 5th 1937. Boxes of his negatives, documenting his adventurous trip and his inventions, were only recently discovered in the attic of his home. Thanks to the generosity of his family, the whole series can now be exhibited for the first time.

Exhibition consists of 75 digital prints from original negatives. The exhibition was prepared by Šechtl & Voseček Museum of Photography in cooperation with Jaroslav Strnad, grandson of the photographer.