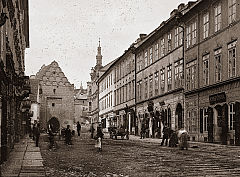 Originally known as Novobranská (New Gate) Street, this street was later renamed Palackého Street, after famous Czech historian František Palacký. The street was built in 1861, following the demolition of two of the old city gates, which had been part of the town fortifications. This is one of very few photographs of the third and last gate, Prague Gate (a), which was demolished in 1884. Today, this is the site of the entrance to the Oscar Nedbal Theatre (b). 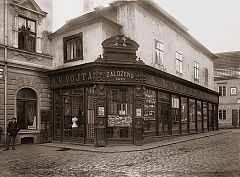 Pražská (Prague) Street, from Žižka Square to the former Prague Gate, used to be the start of the only road from Tábor to Prague, and was lined with shops and small craft workshops. It featured historic houses, with fronts decorated by small arches and “envelope” façades, typical Tábor architecture of that time. In 1900, corner house #211 (c) was a general store owned by Anotonín V. Vojta. After WWII, it was for a long time a glass and porcelain shop. Today, it is an Ober-bank. 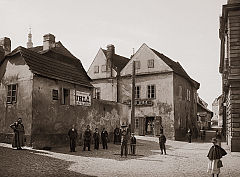 From Palackého Street up to Tržní (Market) Square is Žižkova Street, named after the famous warrior-commander, and co-founder of Tábor, Jan Žižka from Trocnov. The corner house #247 (d) opposite the dance-hall “Střelnice House“ (e) belongs to Prokopova Street, named after another famous Hussite warrior, Prokop the Great. In 1915, house #247 was owned by Marie Kulveitová, and the shop was run by Raimund Dvořák. Today, it is an antique shop. 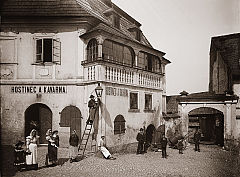 From Tržní (Market) Square, we go up to Špitálská (Hospital) Street, named after the medieval hospital that stood next to the small hospital chapel (f), which is now the Orthodox church. House #344 (g) belonged to Václav Poněšický, the first Tábor water engineer, responsible for the maintenance of the fountains and water tower in the city. At the time of taking this photograph, it was a pub and coffee-shop, “U třech kopů”, (Three heaps), and was owned by Marie Schönová, widow of the former Mayor of Tábor. The pub, “U Šetků”, stood here till the 1960s. 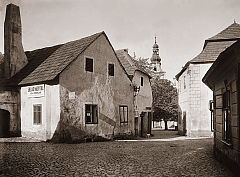 From Svatošova Street we can see house #35 (h) in Křížkova Street, formerly Jungmannova Street. Svatošova Street was named after Tábor schoolteacher, Josef Svatoš. In 1826 he designed a village he called Old Tábor. It later carried his name, Svatošov, but is now known as Sezimovo Ústí. Křížkova Street is named after the first principal of Tábor High School, Václav Křížek. House #35 was originally a store for the cabinetry workshop STOLAR, founded in 1926. František Lemberka opened his tobacconist shop in 1929, in the same house. In the background we can see the Cloister Church of Birth of Virgin Mary (i), dating from 1666. 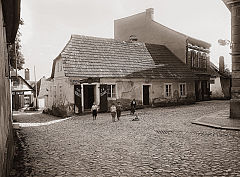 On the south side of Mikuláše z Husi (Nicholas of Hus) Square, on the corner of Filipovská and Soukenická Streets, we can see old house #72 (j). It was called “U Lípy” (By the lime tree), after the lime tree that once stood in the cloister garden where the school now stands. Builder Jan Pravda bought the house in 1904, demolished it in 1908, and built a new two-storey house with a restaurant and a pension (private hotel). Today, “U Lípy” is a café and confectionery store, and is the home of the Šechtl & Voseček Museum of Photography. 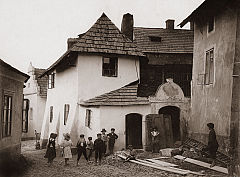 Soukenická (Draper) Street was named after the drapery workshops, from the time, in the 19th century, when drapery was one of the dominant crafts in Tábor. In 1910, house #91 (l) was owned by Jan Effermet, a baker from Sedlec. The entrance to house #91 was in Křížová (Cross) Street, the street which gave access across the Town Park, and to the Way of the Cross approaching Klokoty Monastery. Despite façade changes, the main features have been preserved, and today, it is one of the most beautiful houses in Tábor. 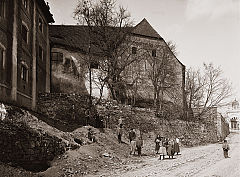 View to Na Parkánech (Battlements) Street, at the time of reconstruction of the second battlement wall (m) of Kotnov Castle. On the left is the main building of the brewery (n), and then the malt house (o), built into one of the four towers of the original Hradiště Castle. Behind the brewery cellars and stores, rebuilt in the 1920s, is the front of the Jewish Synagogue (p), built in 1885. Today, the old malt house contains the exhibition, “Tábor Treasure”. 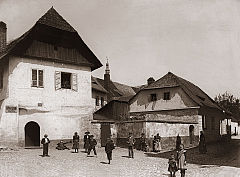 Hradební (Town Wall) Street is at the site of the original Tábor city wall. We are looking from the battlements to house #181 (q), called Šiškovský, an example of the beauty of the houses and alleys of Tábor Old Town. It was rebuilt in this style by bricklayer Krištof Švarz, around 1700. At the time the photograph was taken, the house was owned by Marie Bílá. The house on the right, #182 (r), was owned from 1882 by the Jewish Religious Society. 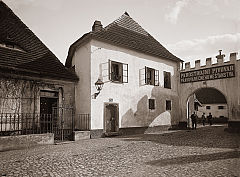 The start of Kotnov Street is next to the entrance to the former brewery, which had been built near Kotnov Castle in 1612. House #129 (s) was originally the town jail. It was bought and demolished by the brewery, at the end of the 19th century. Next to it, house #132 (t), a former barn, together with the gate, is also gone. Today, this is the site of the Dvořák Hotel. 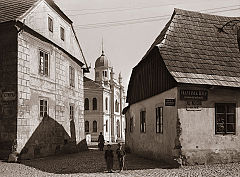 In Kotnov Street, house #132 (u) on the right, at the time this photograph was taken, was owned by a metal-worker and repairer of umbrellas. House #180 (v) on the left dates from the mid-17th century, and was known as Kaplíř’s House. In the 18th and 19th centuries, it was occupied by drapers and tailors. Between these houses we see the façade of the Moorish-style Tábor synagogue (p). The senseless destruction of this important building in 1977 was a sad loss to Tábor. Today the site is used as a car-park, with only a memorial plaque to mark its former importance. 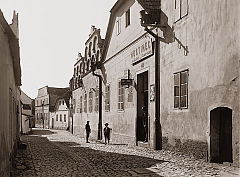 Kotnov Street runs from Kotnov Castle up to Školní (School) Square, lined with houses from the 16th and 17th centuries. Those we see on this photograph are typical, with round arches, renaissance frontages and baroque modifications. The façade of house #138 (w) was renovated in the Empire style. At the beginning of 17th century, the house became a lively pub. At the time the photograph was taken, it was called “U zlaté koruny” (“Golden Crown”), and was owned by Antonie Havrdová. Today it houses the Kodet Museum.