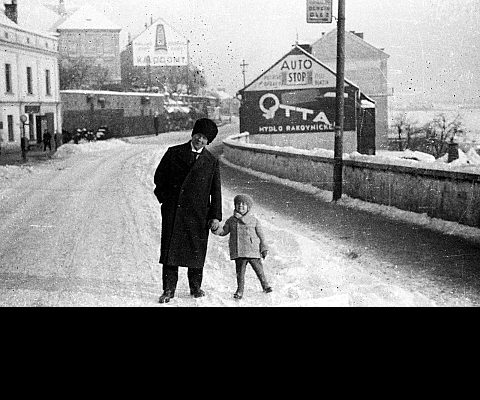 Some of the first dated photographs by Josef Jindřich Šechtl preserved in the 35 mm archive are from the winter of 1928. In the photograph from Christmas 1928 featuring Josef Šechtl and sculptor Dušek, as well as in a small photo essay on driving by car (a Škoda 110, introduced in 1925) from Bálkova Lhota to Pejšova Lhota, we can see that the photographs are being composed in the same way as if they were being captured by a large-format camera.

There are a number of photo essays preserved from the same year, especially of the great celebration of the 10th anniversary of Czechoslovakia. Despite the fact that other photographers of that time were already using sheet films of smaller format, Josef Jindřich Šechtl still took all of these important photos on large glass plate negatives (13×18 cm).