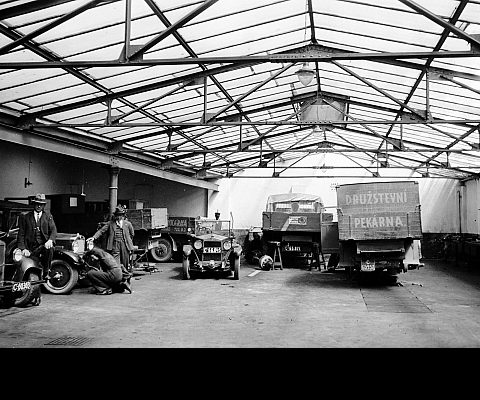 These photographs, of the beautifully equipped Škoda car workshop on Vančurova Street, and the gas station on Křižík Square in Tábor, can be dated by the car number-plates, which were introduced only in July 1932, and by photographs of Tábor on the same roll of film, obviously taken before 1935. Car Č-60.363 was registered in the Sedlčany region; the other cars are from the Tábor region (number-plates between Č-65.661 and Č-66.470).

Škoda cars first appeared in 1925, when the Škoda industrial enterprise purchased the Laurin & Klement car company. Laurin & Klement was originally a bicycle company, founded in 1895 as a consequence of dissatisfaction with the warranties available on German bicycles. In 1899 they started producing motorbikes, and celebrated their success in 1902 by riding 1430 km from Paris to Vienna in 31 hours. In 1905, the company started to produce cars, and it soon became the largest car manufacturer in the Austro-Hungarian Empire. At the time of its purchase by Škoda, the company was facing financial problems, caused by economic crisis, and by a great fire in 1924.