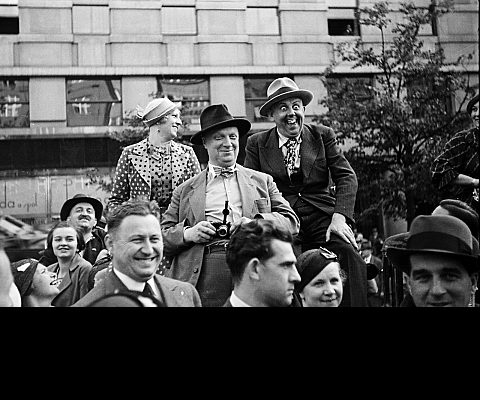 In the finals of the second FIFA World Cup in Rome in 1934, Czechoslovakia got the silver medal (the first of the so far only two great medals Czechs have won at the World Cup). In the final match, Czechoslovakia were in the lead, ahead of Italy by one goal from Antonín Puč, 10 minutes before full-time. The atmosphere of fascist Italy however influenced even the Swedish referee Eklind, who helped Italy to equalise the score, and in the long period of extra time, turned the drama into their success.

Perhaps it was that political intervention that made the mood so cheerful when the footballers were welcomed home to Wenceslas Square in Prague. The man sitting and smiling on the right is Ferenc Futurista (real name František Fiala, 1891–1947), perhaps the most famous Czech comedian of the time. His brother, actor and composer of film music Eman Fiala, sits in the middle holding a Leica camera with an additional range-finding device.