1934: Berlin during the Olympic Games 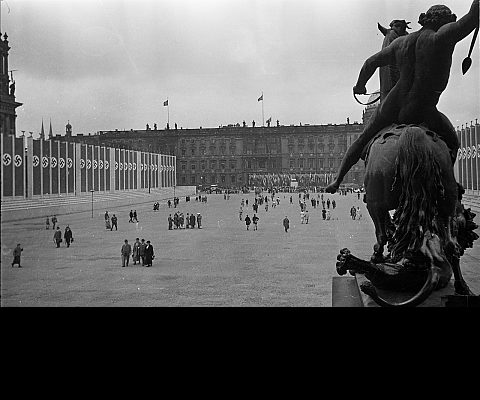 The 1936 Summer Olympics, the Games of the XI Olympiad, were held in 1936 in Berlin, Germany. Berlin’s bid was preferred over Barcelona by the IOC in April, 1931. Although awarded before the Nazi Party came to power in Germany, the new government saw the Olympics as a golden opportunity to promote their Nazi ideology. In Berlin in 1936 a marathon-like tour for the Olympic Torch was introduced, from Olympia in Greece, crossing six frontiers in a journey of 3000 km to Berlin, through Greece, Bulgaria, Yugoslavia, Hungary, Czechoslovakia, Austria and Germany. Four million tickets were sold for all the events of the 1936 Summer Olympics. This was also the first Olympics with television coverage.

Josef jindřich accompanied his friend sculptor Dušek, who had a statue exhibited in Berlin. It is not clear if Josef Jindřich participated in the actual Olympics Games themselves, however he very carefully recorded the atmosphere of pre-WWII Berlin.