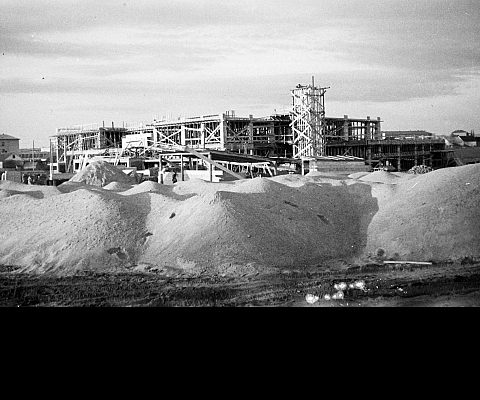 The new hospital in Tábor was one of the most modern hospitals by its equipment and layout.

End of the first phase

The project to build a regional hospital, which has progressed for the last two years only very slowly, is at last gathering speed towards its completion. Proprietor – the regional committee – after numerous interventions with the national office and various influential agencies, has during the last meeting resolved to place a contract with a firm to complete the building, which up till now has appeared only as a concrete skeleton.

Equipment appointments of the hospital

Even today we can say with confidence that the new Tábor hospital will be one of the most modern, not only in Southern Bohemia, but also in the whole country, because it is being built new from its very foundations, and is located in the very beautiful panorama of Tábor and Klokoty. This location offers the cleanest air and hours of intensive sunshine, and is surrounded by greenery of orchards, woods, meadows and fields. Considered during the building are also the newest and most modern requirements of hospital care as may be found, locally and abroad.

It can be said with certainty today, that the new hospital will have a sanatorium quality, and will serve to its builders as an example of honourable intentions and love for fellow human beings who at present struggle with various diseases or are afflicted with injuries. Hospital rooms will be cosy with a richness of sun’s radiation, with large windows, as far as possible facing to the south. The rooms will be painted in pleasant shades, equipped with most modern furniture and steel built-in wardrobes. Every room will offer a wash basin with flowing hot and cold water and white ceramic tiles. The floors, in the interest of hygiene and ease of cleaning, will be of white chamotte ceramic.

Another innovation by every bed will be an electrical outlet to allow connection of table or reading lamp or electric medical equipment, and also an outlet for connection of radio headphones, to allow patients to listen to music without interfering with fellow patients who may not wish to listen to the radio. Electric illumination of the rooms will use the latest findings in illuminating technology, and will have most pleasant quality without irritating the eyes. Night time illumination will be muted, and will be a new invention of our own electrical firm, Krch Brothers of Tábor.