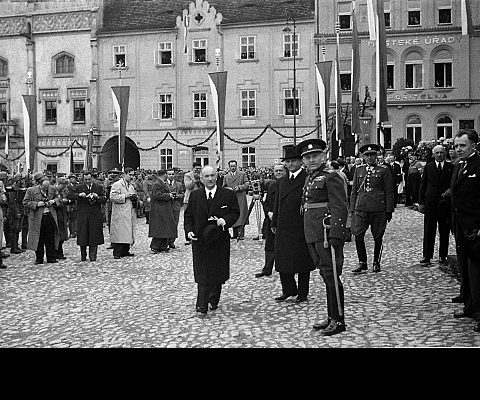 The visit of Edvard Beneš to Tábor on 21st May 1938 was his first official visit to this city in his role as president of Czechoslovakia. During a grandiose welcoming ceremony in Žižka Square, the city Mayor Václav Soumar gave Beneš a statue of “God's Warrior” by sculptor J. V. Dušek (It is believed that the similarity of face on the Husitte statue and the president is just coincidence). The visit continued to the Schools of Hana Benešová, (named after wife of Edvard Beneš, who studied there).

The reportage itself must have been very physically demanding for 61-year-old Josef Jindřich, since individual shots on the film are taken from very different locations and angles. Especially interesting is the first exhibited picture where Josef Jindřich managed to photograph the president with most of the other photographers behind him, just after the official welcome.

On Saturday, May 21st 1938, our historic town greeted within our medieval walls, for the second time, the president of the republic, Dr Edward Beneš. The first time had been on December 22nd 1935, shortly after his election to the office when, returning from a tour of the southern part of the country, he was asked by Mayor V. Soumar if he could at some time devote a whole day to Tábor as an official visit. This has now become a reality.

The President and his wife, Mrs. Hana Benešová, were accompanied by the minister of National Defence Fr. Machník; minister of Education and National Enlightenment, Dr E. Franke; provincial president Dr Jos. Sobotka, representing the office of the president of the republic general Silv. Bláha; chief of the diplomatic protocol, Ambassador J. Smutný; and other dignitaries. After the military fanfares and the state anthems had been played, and the parade of officers and local legionnaires (WW I veterans) had been reviewed, the president ascended to the decorated platform, where he was greeted by the assembled town and region.

The president was presented with an honorary gift, a large statue, “Božího bojovníka” (“God’s Champion”), the work of academic sculptor J. V. Dušek. The president was asked if the sculpture could be installed in the garden of his private summer residence in nearby Sezimovo Ústí, as “a reminder of the rich Hussite history and the significance which this part of the country has contributed to the national, cultural and social development of the nation”. At the closing of the ceremony, local choir “Hlahol” sang the Hussite’s chorale. The president, with his wife and entourage, then left the town square, and proceeded to walk through Palacký Street and Wide Street toward the Girl’s Collegiate, which carries the name of Hana Beneš in her honour, as she was a student here in both Primary and High school. At the main entrance to the school, the whole entourage was walking, as the crowds of students lined the street with great enthusiasm, waving small flags. Here the regional school inspector J. V. Flos met and addressed the presidential couple, introducing to them both of the present school principals, Girls’ Collegiate School principal Anna Beránková, and Girls’ Primary School principal Jan Broukal.

The distinguished guests were then led into the principal’s office, where they signed the school chronicle. They then entered a festively decorated classroom, where they were greeted by students dressed in national folk costumes, and with a greeting song arranged and conducted by music teacher O. Nikodýmová. The song was followed by the poem, “V den vzpomeneme”. (“In that day we will remember”), the work of one of the teachers at the school, R. Cikhart. This was recited with great beauty and sensitivity by female student Bl. Blechová. Mrs Benešová, visibly touched, kissed the recitator, and was then given a photograph of all the students, and a bouquet of forget-me-nots.

The president then left the school, and proceeded with the whole entourage through “Parkány” (the medieval walls and bastions on the south side of town) to the Grand Hotel. Here he was greeted by a deputation of the academic society, “Štítný”, who gave the president a special diploma. A delegation of district medical doctors was also received by the president, and also presented an honorary gift.

Although one of Prague’s newspapers had announced that the programme for the president’s visit to Tábor would be shortened, it was not so, and the president continued his afternoon programme as originally planned. Crowds of citizens lined the route, along the top of the Jordán water reservoir, waving and greeting the president enthusiastically, on his way to the garrison of the 52nd artillery regiment.

Meanwhile Mrs Hana Benešová was observing, from a balcony of the Grand hotel, a parade of high school students as they were marching to the Sokol stadium. It was a great joy to observe rows and rows of youths in their gym apparel, and in colourful folk costumes. During the opening of the mass body exercises, the president and his wife walked through the lane lined with members of various communal associations and clubs, all dressed in their costumes and club uniforms. Decorated war veterans were also present.

The president entered by the main entrance to the platform where the rest of his retinue, ministers and local dignitaries, were gathered. Body exercises of the youth were flawless, openings perfectly executed, dances of Moravian beseda were joyful and alive. After the final march-past of all the performers, President Beneš left the stadium and departed with his entourage to Prague, to resume the management of pressing affairs of state.