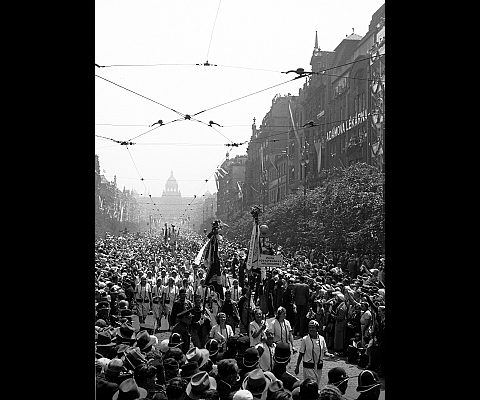 The Sokol movement (from the Czech word for “falcon”) is a Czech and Slavic youth movement and gymnastics organization, founded in Prague in 1862 by Miroslav Tyrš and Jindřich Fügner. Primarily a fitness training center, Sokol, through lectures, discussions, and group outings, provided what Tyrš viewed as physical, moral, and intellectual training for the nation. This training extended to members of all classes, and eventually to women, and to Slavs in Polish, Slovene, Croatian, Serbian, Ukrainian, Macedonian and Russian lands. In many of these nations, the organization also served as an early precursor to the Scouting movements.

Slet comes from the Czech word for “a flocking of birds” (Czech plural: Slety), and was a mass gymnastics festival that became a grand tradition within the Sokol movement. This first one, in 1882, and the following Slets, included an elaborate welcoming ceremony at the train station, mass demonstrations, gymnastics competitions, speeches, and theatrical events, open to members of all Sokols. The 10th Slet in 1938, on the eve of the Munich Agreement, had 350,000 participants and was watched by 2 million spectators. Sokols were later brutally suppressed within the Protectorate, when Sokol was banned during the Nazi occupation of the Czech lands. After WWII, one more Slet was held in 1948 before they were once again suppressed, this time by the Communists. The Communist party tried to replace the tradition of Slets with mass exercises employed for propaganda purposes, calling them Spartakiads (Spartakiády).