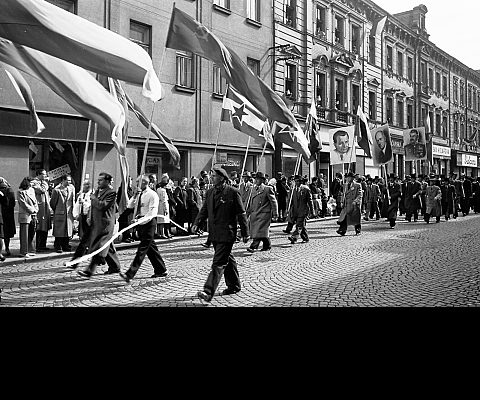 A hundred thousand of us came for May 1st, to the region under Kotnov, the land of the Blaník knights. A hundred thousand workers, farmers, craftsmen; a hundred thousand women, men, young boys and girls met in the huge stream of procession, whose purpose was given by the February victory of working people over home and foreign reactionaries.

A hundred thousand of us came, to a day of celebration of work, to give thanks to Gottwald’s government for national insurance, that insures everyone when he is old or sick; and to the government of National unity gave thanks for making the Hradec programme a law, that starts new life in our countryside, to express our happy agreement with more nationalization of industry, large scale business, import, export, that saves tens of billions that was taken away by capitalists.

A hundred thousand of us in the region under Kotnov and Blaník mountain came to thank Gottwald’s government, and the minister of education Prof. Zdeněk Nejedlý, for the law about unified schools, that allows everyone to be able to study. We came to thank our government for the new craftsman tax; for allowing new married couples to borrow money; and for everything it has made in this short time. We came to also express our agreement with the new constitution, that we have discussed, and we all know that it will ensure us not only all the advantages of our national and democratic revolution, but also allows us to go more to socialism.

A hundred thousand of us came to manifest for making 2 year plan till February 28th, and to follow the example of farmers from Chlumec and Skrýchov, who announced increases in their agricultural production.

A hundred thousand of us met in May processions, to tell our greeting to Soviet Union and to all Slavic and democratic countries, in a united way to greet all warriors for democratic rights, in countries where capitalism is still conquering.

A hundred thousand of us met, to manifest for peace against the sources of war.

A hundred thousand of us in the day of unified May the first met in the fifteen cities of the Tábor region, to express our agreement with unified candidate of National Unity, and to show remains of reaction our invincible power and passion, handle with everyone, who would somehow try to steal from us – workers, farmers, craftsmen and working intelligence – what we by our work, our determination and effort reached in all areas, economic and political.

A hundred thousand of us met in the Tábor region, to together with advanced powers of all the republic, started firmly in the forward direction, faster to socialism, to happiness, and to joyful life for us all.