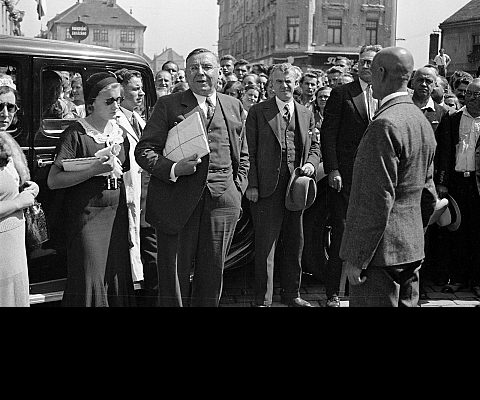 Antonín Čermák (on the left) was born May 9th 1873 in Kladno, in the family of a poor miner, who in 1875 moved with his family to America. By hard work and study, his career culminated in 1931 when he was elected Mayor of Chicago. He died March 6th 1933 after being shot in Miami by an assassin from Sicily, who was reportedly aiming for President Roosevelt.

Václav Soumar (on the right) was in the years 1929–1939 the very successful Mayor of Tábor. In 1939, he refused to remove the portrait of ex-president Beneš from his office. He also refused to leave his post. The Nazis arrested him, and sent to the Buchenwald concentration camp until the end of WWII. In 1945, he again became mayor of the city, but his health didn't allow him to work fully in this function. He died in 1947.