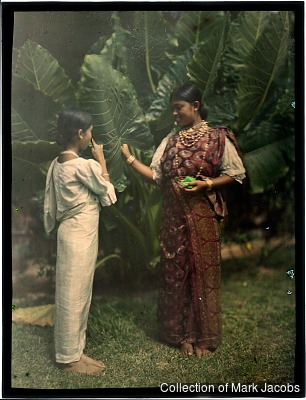 “A Maid And A Bride of Kandy: Ceylon”.

Helen Messinger Murdoch was one of the most influential women to work with the Autochrome. Though American, Murdoch was a Fellow of the Royal Photographic Society in England. Murdoch’s Autochromes taken in India and Ceylon (Sri Lanka) comprised the very first full-fledged color series to have appeared in the National Geographic Magazine made by a woman photographer. In 1913, the 51 year old Murdoch decided to embark on a round the world tour – the first woman photographer to make such a journey—photographing on both Autochrome plates and black and white negatives. Though this photograph was taken in 1914, it did not appear in the National Geographic Magazine until 1921. 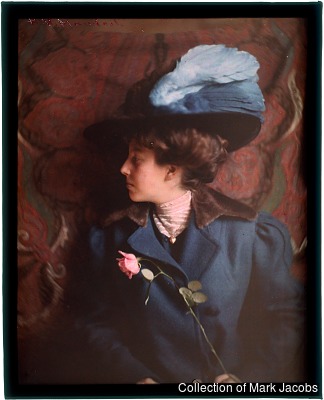 In 1911, Murdoch visited London where she became a member of the Royal Photographic Society. She exhibited in the society’s annual Colour Exhibition and rented a space at Ethel Henry—Bird’s 80 Wigmore Street Gallery, using it as a portrait studio and to exhibit her photographs.

During her next visit to London, in 1912, Murdoch relocated to the Halcyon Women’s Club, a venue recently launched for women graduates in medicine, science, and the arts by the British photographer Agnes Beatrice Warburg. Warburg’s brother John Cimon Warburg was an autochrome aficionado, probably the most respected one in Britain at the time. Keeping a room at the Halcyon as her base, Murdoch made photographic expeditions into the British and French countryside and then exhibited plates of her travels and commissioned portraits at the Halcyon, the RPS, and around the United Kingdom. This portrait probably dates from this period.

Murdoch’s biographer, Pam Roberts has noted that “Murdoch was undoubtedly a “new” woman—independent, assertive, gregarious, confident, and comfortable with new technologies like photography and later aviation—she also loved British history, architecture, and tradition and showed a noticeable enthusiasm for anyone with a title”. 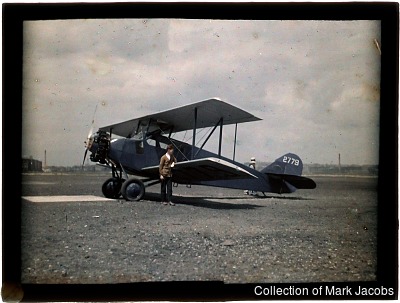 Murdoch seemed reluctant to return to Boston after her “Around the World Tour with the Lumière Autochrome”. She lingered in California on her way back, photographing the building of the Panama-Pacific International Exposition in San Francisco and the Panama-California Exposition in San Diego, and finally arrived in Boston via Denver and Chicago in May 1915. While in Denver, Murdoch stopped in Estes Park and photographed the American Autochromist Fred Payne Clatworthy.

World War I put an end to Murdoch’s globe trotting, but not her thirst for stimulation. With the same fevour she possessed for travel and adventure, Murdoch took up flying and focused her photographic work on aviation, becoming a member of the National Aeronautic Association. She photographed the Lindberghs, Richard Evelyn Byrd, Amelia Earhart, and aeronautical meets, and she proudly took the first Lumière autochrome of Boston from the air in 1928.