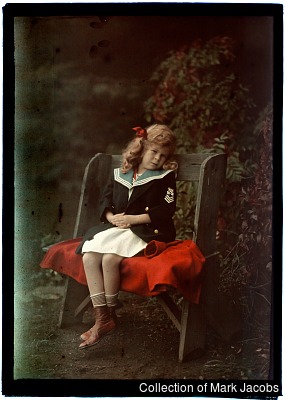 Alfred Stieglitz’s contribution to the history of photography extends far beyond his photographic work, which he began as a student in Germany in 1883. He influenced generations of photographers, painters, and sculptors both directly and indirectly. In 1905, he founded the Little Galleries of the Photo-Secession at 291 Fifth Avenue in New York, which later became known simply as 291. It was in these rooms that Autochromes were first exhibited in America on Sept 27 & 28, 1907. He elevated photography’s status to the level of painting and sculpture through the numerous pioneering exhibitions that he organized. Stieglitz was a founder of the Photo-Secessionist and Pictorialist photography movements in the United States and promoted them in Camera Notes and Camera Work, the influential journals that he founded and edited. Stieglitz’s second wife was the painter Georgia O’Keeffe.

This Autochrome and the one of Hedwig Stieglitz originally came from the private family collection of Georgia Engelhard (1906 – 1986), the daughter of Alfred Stiegliz’s sister Agnes and her husband George Engelhard. 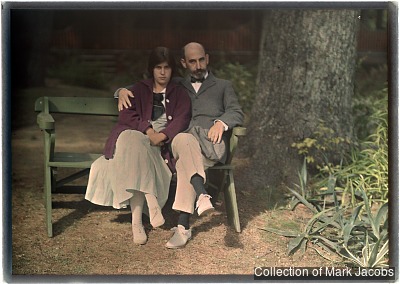 Joseph Obermeyer (1862 – 1943) was a long-time friend of Alfred Stieglitz as well as a business associate and eventually became Stieglitz’s brother-in-law. Obermeyer’s sister Emmeline became Stieglitz’s first wife and the mother of Steiglitz’s daughter, Katherine (1898 – 1971) or “Kitty” as she was more often called. Stieglitz had a strained relationship with his daughter, as she held his relationship with the painter Georgia O’Keefe against him. After the birth of her own child, Kitty Stieglitz suffered from severe depression and eventually spent the rest of her life in a sanatorium. Due to the belief that his presence would only serve to worsen her condition, Stieglitz never saw his daughter again. 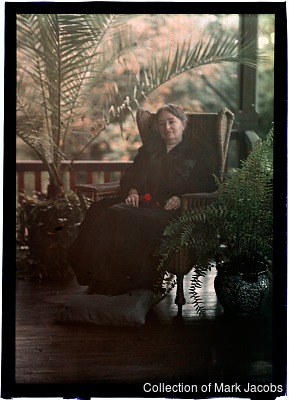 Portrait of Hedwig Stieglitz, Seated On A Porch With Ferns.

Hedwig Werner Stieglitz (1844 – 1922), the photographer’s mother, was, like her husband, a German immigrant. She came to New York with her family around 1855, and met and married Edward, twelve years older, in 1862. Alfred Stieglitz was their first child. A very similar Autochrome is in the collection of George Eastman House in Rochester, NY, but is credited to the photographer Edward Steichen. Both Autochromes appear to have been taken in the Stieglitz family summer home in Lake George, NY.