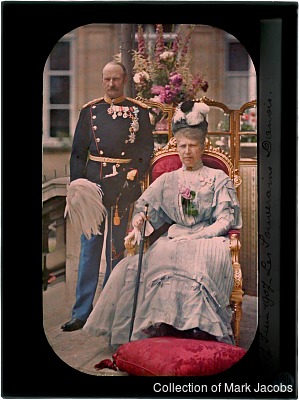 This is the companion color photograph of King Frederic VIII and Queen Louise of Denmark, taken on June 17, 1907 at the Ministry of Foreign Affairs in Paris and published in the L’llustration on June 29, 1907. The first news photograph that appeared in color. In the June 22 1907 issue, the L’llustration announced the publication of the companion portrait as follows: “All the newspapers reported that on Monday morning, before their departure, the King and the Queen of Denmark had been photographed “in color” for the Illustration. The day before, M. Maurice Herbette, the Ministry Attaché, had presented to the King and the Queen an excellent color picture taken by our journalist Léon Gimpel, in the salon of their Quai d’Orsay apartment. Delighted by this first portrait, the King and the Queen agreed to give a formal “recognition” to the discovery of MM Lumière, the French discoverers, and had their color picture taken on the staircase of the Ministry of Foreign Affairs. The original will be sent to them in Copenhagen through the services of the French Embassy, and we will publish a copy in the next issue of the magazine.”

With the publication of the portrait on June 29, 1907, the Illustration indicated “that this color portrait had been developed and printed in 92,000 copies in ten days: everybody with some knowledge in the art of typography will agree that it is an absolute “tour de force”. 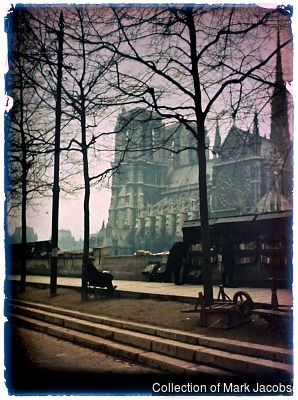 A restless and innovative photographer, Gimpel experimented with perspective, produced self portraits using distorting mirrors and experimented with night time photography. However, it is his pioneering work in color photography that he is most notable for. In 1904, Gimpel met the Lumière brothers. It was Gimpel who organized the public introduction of the Autochrome in the rooms of L’Illustration in 1907. Limited by the long exposure time required, Gimpel used the process to photograph still lifes and landscapes. Assisted by his colleague Fernand Monpillard, Gimpel modified the plates to produce “instant” color pictures. Thanks to his works Gimpel was the only photographer who succeeded in capturing, in colour, scenes of everyday life during la Belle Époque.