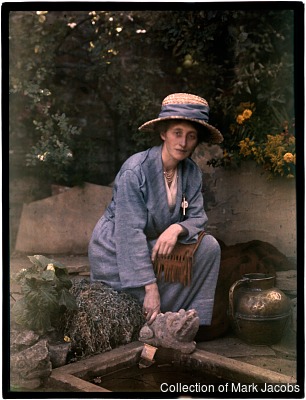 In 1903 (Mary) Olive Edis and her sister Katherine opened a studio in Sheringham, Norfolk where they specialised in portraits of local fisherman and members of the local nobility. In 1910, Olive’s photographs were regularly appearing in the Illustrated London News and in 1912 she started making Autochrome images. She became an RPS (Royal Photographic Society) member in 1913 and in that year won a medal for her Autochrome portraits in the RPS exhibition. In 1914 she was elected FRPS (Fellow) and designed an Autochrome viewer, known as a diascope, which she patented. She later operated studios in Farnham (Surrey), Ladbroke Grove and London. Her sitters included George Bernard Shaw, Emmeline Pankhurst, Arthur James Balfour, Thomas Hardy, King George VI, and many other leading figures in the UK. Many of these Autochrome portraits were eventually willed to the National Portrait Gallery in London. 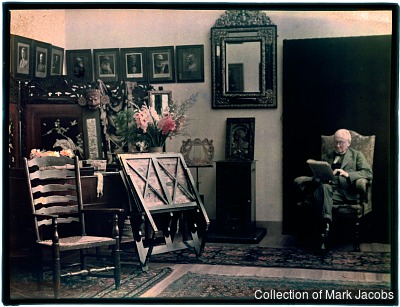 Edis was appointed an official war artist and photographed British Women’s Services and the battlefields of France and Flanders 1918 – 1919 for the Imperial War Museum. Between July and November 1920 she went to photograph the Canadian Rockies. This was a commission from the Canadian Pacific Railway, and she used their specially equipped photographic railway carriage to carry out her work. “Miss Edis has been very successful in her reproduction of Indian types [Native American Indians], their full dress regalia are admirably shown.” Sadly none of this work has survived. In 1928, when she was 52, Olive married Edwin Galsworthy a solicitor and director of Barclays bank and a cousin of the novelist John Galsworthy. This family connection opened doors into society for her and she photographed many people of national importance.